Where it all began

Tommy Sopwith was a racing driver of note and came from the great aviation family that built the famous WW1 British fighter plane the Sopwith Camel. Jocelyn Stevens was from a family backgrounded in British newspapers and some say it was he who came up with the bright idea! 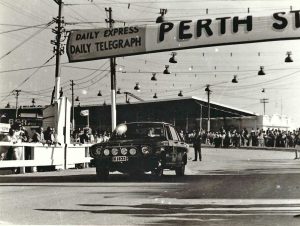 In 1967 Britain was in the economic doldrums, its manufacturing industry was in serious decline and the number of people out of work was reaching levels not seen since WWII. The country’s leaders were looking for ways to champion industry and raise the national morale. Sir Max Aitken was a media baron and chairman of the Daily Express, he felt the need to do something.

Following a boozy lunch between Tommy Sopwith and Jocelyn Stevens, Sopwith headed to the office of Sir Max to which he had direct access. “A race across the World” should be held that would showcase Britain’s motor manufacturing industry” he said, “and naturally a British car would win”. Sir Max bought the idea almost on the spot.

Given the go-ahead, in September Tommy Sopwith turned to his motor racing friend Jack Sears for assistance. He needed help to develop the concept for the event. With the idea hatched, early press articles were released promoting the Marathon.
In Australia David McKay, who was Australia’s first Touring Car Champion and motoring editor of the Daily Telegraph, was alerted by the newsfeeds and telexes from the UK. A great marathon event was to be held. McKay headed to the office of David McNicol the Daily Telegraph’s Editor in Chief, and very soon after they were both in the office of the papers’ owner Sir Frank Packer. A same day telephone call to Sir Max in London secured joint sponsorship of the event. 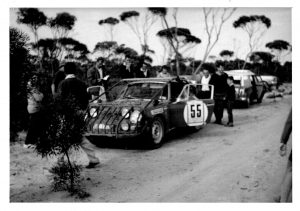 In the UK Autumn of 1967, with only 12 months before the start of the Marathon, Jack Sears contacted his friend and former Head of the BMC Competitions Department Stuart Turner. Turner had recently moved camp across to Castrol UK and Sears asked Turner if he knew someone who could help construct the event. In December 1967 Turner made a call to Tony Ambrose who had retired from rallying in 1965 but had had itchy feet ever since. Ambrose had won just about every major rally event across the UK and Europe in Austin Healeys and Mini Coopers as part of the BMC Factory Team until his retirement.

Turner: “the Daily Express has some crackpot idea of running a race or rally from London to Sydney and need someone to do a feasibility study”.
Ambrose: “What does that mean?”
Turner: “We want someone to drive down to Sydney and tell us if it will work”
A few days later Ambrose joined Sears and Turner for a dinner at the Noah’s Ark Restaurant in East Hanney in Berkshire, and over several more bottles of red (a trend was starting here) they agreed to conduct the “feasibility study”. The study would start with a bit of “paper plotting” and then be followed by a drive to Bombay in India after the Monte Carlo Rally to be held in January of 1968. Ambrose’ feedback in his feasibility study report was hugely enthusiastic. Soon after, Sears offered him the prospect of a job as a full-time member of the Event Committee on the magnificent stipend of £1000.
With the idea now having “meat on the bone”, an Event Committee was formed which would initially be comprised of Sir Max Aitken as Chairman, Tommy Sopwith, Jocelyn Stevens, Evelyn de Rothschild, John Robertson, Jack Sears and Tony Ambrose. Their plan was to meet every two weeks in the Daily Express Boardroom. Things were beginning to develop quickly. 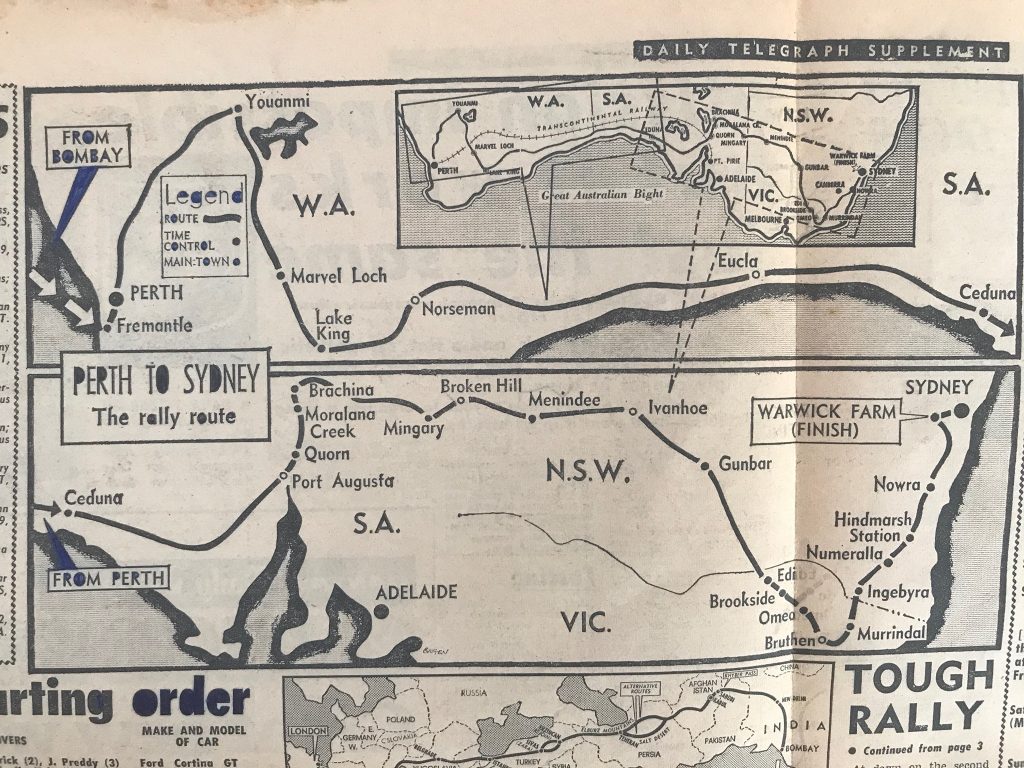 On the recce to Bombay Jack Sears and Tony Ambrose were joined by Mike Wood-Power who was the husband of the sister of Don Shead who built the race engines for Jack Sears racing boats. Wood-Power ran a popular “Hippy Trail” travel agency that specialised in overland tours between Europe and India, catering predominantly for returning Australians. Wood-Power knew the roads and the pitfalls, he had the contacts, and he would short cut the time needed to find a Marathon route. Conveniently, he knew how to cross inter-country borders, who to speak to, a major obstacle in countries that were literally at war with each other even in 1968.

Incredibly, the recce across Europe to Bombay was completed in just five weeks. The trio returned to London in early to mid-February 1968 and were rewarded with full-time roles funded by the Daily Express. Jack Sears was installed as the Secretary of the Event and Tony Ambrose as the Assistant Clerk of Course. Dean Delamont (Director of Motorsport at the RAC) would manoeuvre his way to become the Clerk of Course, while Stuart Turner was also added to the team.

In March of 1968, the first letters of invitation were sent out to prospective entrants and manufacturers, along with the first version of the Supplementary Regulations. The Entry Fee of £550.00 was published which was inclusive of the Channel Crossing and the 9 Day crossing from Bombay to Fremantle onboard the SS Chusan. A £125 supplement was required for any additional Crew.

The Daily Express and the Daily Telegraph both continued to run articles trumpeting the great event with entries scheduled to close on 1st June 1968.
With just eight months to go to the start, the Recce Team had still not set foot on Australian soil. The route across the Australian continent included the toughest part of the whole marathon and it had not been recced yet.

Sears, Ambrose and Sopwith flew into Sydney in late March for meetings with Sir Frank Packer, David McNicol and the Confederation of Australian Motorsport (CAMS) with Owen Grahame the then President. Soon after this Sears and Ambrose flew to Perth to meet up with Sydneysider John McKittrick, a friend of David McKay’s, to begin the recce of the Australian section back to Sydney.
McKittrick had arranged to provide an Austin 1800 from a local BMC Distributor for the recce. Tony Ambrose’ autobiography outlined the challenge the team faced. “It quickly became apparent that while in the whole of the European Section, information flowed from Motoring Organisations regarding the most suitable route to follow…” this would not be the case down under, as very few rally enthusiasts seemed to have ever driven coast to coast across Australia.
The Recce Team first checked out Fremantle but rejected it, then they headed to “Worcester Park” trotting track near Perth where with the assistance of Sir Frank Packer’s contacts, doors were opened. The starting place for the Australian Section of the Marathon was then agreed. Next the trio headed north to a place called “You-an-me” and found it all but deserted (no different today) except for a farmer who gave them enough fuel to get back south. In his autobiography, Ambrose described the “hive of activity” of an equally deserted Lake King “in the middle of nowhere”, albeit with a million flies. They didn’t stay long and headed off in the direction of Kalgoorlie but in fact it was to Norseman.

The recce was interrupted in South Australia when John McKittrick decided that he didn’t want to continue. They detoured to Adelaide so he could fly home to Sydney. A few days later Sears and Ambrose backtracked to the Flinders Ranges and followed the then mapped route cross-country to Broken Hill, and then southeast to the Victorian border. They needed a break so decided to head to Melbourne for a few days R&R. Returning to the route they had some weather issues (i.e. snow) as they drove the Great Alpine Road over the high country down to a place called “Ombo”. The pair finally arrived at Warwick Farm in early April. It had taken the team less than three weeks to recce the “route” of the Australian Section of the Marathon. Logistics for the manning of controls and on-the-ground organisation would fall to CAMS and Car Clubs across the country.

A few days later they flew home to London via California for a stop-over with Tommy Sopwith who had stayed on in Sydney for business reasons. Upon arrival back in the UK Ambrose and Sears were expecting to be overwhelmed by entries. Unfortunately, it was exactly the opposite, with no more than a dozen entries received. The Marathon was looking like it might be a great “white elephant”.

On the home front, with formal invitations received, David McKay set about procuring and preparing the Daily Telegraph/Holden Dealer Team HT Monaros (Cars 36, 68 and 76). Harry Firth and the Ford Motor Company were also well into the preparation of three XT GT Falcons (Cars 2, 24 and 29), and Reg Lunn was doing the same with Car 97. A three car Amoco Volvo Team for Cars 8, 43 and 63 began their planning with the factory in Sweden and the Maitland Motors Holden HT Kingswood Car 91 entry of Rally Legend John Bryson, Jack Murray and Brian Madden began. Stuart MacLeod decided upon an Alfa Romeo Berlina in Car 39 while Evan Green/Gelignite Jack Murray and George Shephard decided to have their BMC Austin 18 built by the factory in the UK.
Cars from all over the UK, Europe, Japan and the USA were now being prepared but the Committee just didn’t know about them all. In the UK, Ford, BMC and Rootes Group soon committed, and from Europe teams from Ford, Citroen, DAF and Moskovitch also rolled in…

The Marathon was on a roll and excitement was growing worldwide. On the 24th November 1968 ninety eight teams departed Crystal Palace Raceway on the outskirts of London. Seventy two cars arrived in Fremantle on the 13th December to face the restart for the Australian Section held between the 14th December and the 17th December 1968.

The 2022 Perth-Sydney Marathon will celebrate this magnificent event and the impact it left on a worldwide audience of motorsport enthusiasts. We will bring participants and vehicles together from the Marathon and drive the route they drove in 1968 for the first and last time since 1968.
Enthusiasts are encouraged to come and share the celebration and drive roads that will never be driven again, in the company of rallying legends and the cars they drove.